WASI NN is a proposal that allows WebAssembly guest modules running outside the browser to perform neural network inferencing by using host-provided implementations that can leverage CPU multi-threading, host optimizations, or hardware devices such as GPUs or TPUs. This article explores the goals of WASI NN, existing implementations, and details a new experimental implementation targeting ONNX, the Open Neural Network Exchange, which allows the usage of models built with PyTorch or TensorFlow from guest WebAssembly modules.

The implementation for ONNX runtimes with WASI NN can be found on GitHub.

The WASI Neural Network API is a new WebAssembly System Interface proposal that allows guest WebAssembly modules running outside the browser, in WASI runtimes, access to highly optimized inferencing runtimes for machine learning workloads. Andrew Brown has an excellent article on the BytecodeAlliance blog about the motivations of WASI NN, but in short, the proposed API describes a way for guest modules to load a pre-built machine learning model, provide input tensors, and execute inferences on the highly optimized runtime provided by the WASI host. One of the most important things to note about the WASI NN API is that it is model agnostic, and so far quite simple:

As it is obvious from the API, there is no assumption around the way the neural network has been built – as long as the host implementation understands the opaque byte array as a neural network model, it can load it and perform inferences when compute is called using the input tensors. The first implementation for WASI NN in Wasmtime is for the OpenVINO™ platform, and Andrew Brown has another excellent article describing the implementation details. This article explores how to add an implementation that performs inferences on the host for ONNX models.

ONNX, or the Open Neural Network Exchange, is an open format which defines a common set of machine learning operators and file format that ensure the interoperability between different frameworks (such as PyTorch, TensorFlow, or CNTK), with a common runtime and hardware access through ONNX runtimes. Two of the most popular machine learning frameworks, PyTorch and TensorFlow, have libraries that allow developers to convert built models to the ONNX format, then run them using an ONNX runtime. This means that by adding ONNX support to WASI NN, guest WebAssembly modules can perform inferences for both PyTorch and TensorFlow models converted to the common format – which makes it even easier to use a wider array of models from the ecosystem.

Because the WASI ecosystem is written in Rust, an ONNX implementation for WASI NN needs the underlying runtime to either be built in Rust, or have Rust bindings for its API – and this article describes building and using two such implementations for WASI NN, each presenting their own advantages and drawbacks that will be discussed later:

Implementing WASI NN for a new runtime means providing an implementation for the WITX definitions of the API. For example, the API used to load a new model is defined as follows:

Then, Wasmtime tooling can be used to generate Rust bindings and traits for the API that can then be implemented for a specific runtime:

An article describing how to implement a new WebAssembly API from WITX for Wasmtime can be found here.

The two implementations (the one that uses the ONNX C API and the other using Tract) are fairly similar – they both implement the Rust trait defined by WasiEphemeralNn, which defines the following functions from the WASI NN API:

During their lifetime, guests can perform any number of inferences, on any number of different neural network models. This is assured by the internal state of the runtime, which keeps track different concurrent requests (the specific implementations can be found on GitHub). The project also comes with a binary helper that mimics the Wasmtime CLI, with added support for both ONNX runtime implementations.

First, let’s consider the official ONNX implementation – it is built in C++, and provides a highly efficient runtime for inferencing. It comes with APIs for a number of different languages, including Python, Java, JavaScript, C#, or Objective-C, all of them through accessing the ONNX shared libraries (.dll, .so, or .dylib, depending on the operating system). To use them from Rust, the onnxruntime-rs crate offers bindings to the underlying C API of the runtime, with a nice wrapper that makes using this API from Rust much easier than directly accessing the unsafe functionality exposed by the C API. Keep in mind, however, that this is not an official project, and currently targets a slightly older ONNX version, 1.6.

To execute the inference using the native ONNX runtime, first download the ONNX runtime 1.6 shared library and unarchive it, then build the project (this is temporary, until proper release binaries are provided in the repository). At this point, the helper wasmtime-onnx binary can be used to execute WebAssembly modules that use WASI NN to perform inferences. The following examples use the integration tests from the project repository, and use the SqueezeNet and MobileNetV2 models for image classification.

The previous command can be translated as follows: using the wasmtime-onnx binary, which provides a host implementation for performing ONNX inferences using the native ONNX runtime, start the WebAssembly module wasi-nn-rust.wasm and invoke the test_squeezenet function, which loads the SqueezeNet model and performs an inference on a picture of Grace Hopper. Because the project does not yet enable GPU usage for the native ONNX runtime (see issue #9), the inference is performed on the CPU, and is multi-threaded by default. This means that after GPU is enabled, the inference time will be even lower. But this comes at the cost of ease of configuration – because this runtime uses bindings to the ONNX runtime’s C API, the shared libraries first have to be downloaded and configured (same for the GPU support, where in addition to the proper ONNX release with GPU support, the graphics drivers will also have to be properly configured).

This is the main reason a second implementation is provided here – Tract is an ONNX runtime implemented purely in Rust, and does not need any shared libraries. However, it only passes successfully about 85% of ONNX backend tests, it does not implement internal multi-threading or GPU access, and the inference times on the CPU are slightly higher than for the native ONNX runtime. The same binary, ONNX model, and WebAssembly module can be used to run the same inference – the only difference is passing the --tract flag, informing the runtime to use the alternative implementation for ONNX:

Note that LD_LIBRARY_PATH is omitted in this example, but it still has to be passed for now, depending on whether support for both implementations has been compiled. In future releases, compile-time flags and features will choose between the two, and the flag will no longer need to be passed when only the Tract runtime has been compiled. Also see issues #11 and #16.

The relative performance between the two can be seen in the inference times, and in most cases, the Tract runtime will yield slightly higher latency on the same hardware – but the fact that it comes with no runtime dependencies means that, for non-critical scenarios, or when running on CPU-only machines, configuring and running this project becomes significantly easier (i.e. downloading a single binary).

A few notes on performance:

The following charts represent the total inference times for running the SqueezeNet and MobileNetV2 models on CPU-only hardware, natively, with WASI NN, and then purely in WebAssembly.

Being a much smaller module, the inference times for SqueezeNet are smaller relative to MobileNetV2, but the relative performance difference can still be observed: 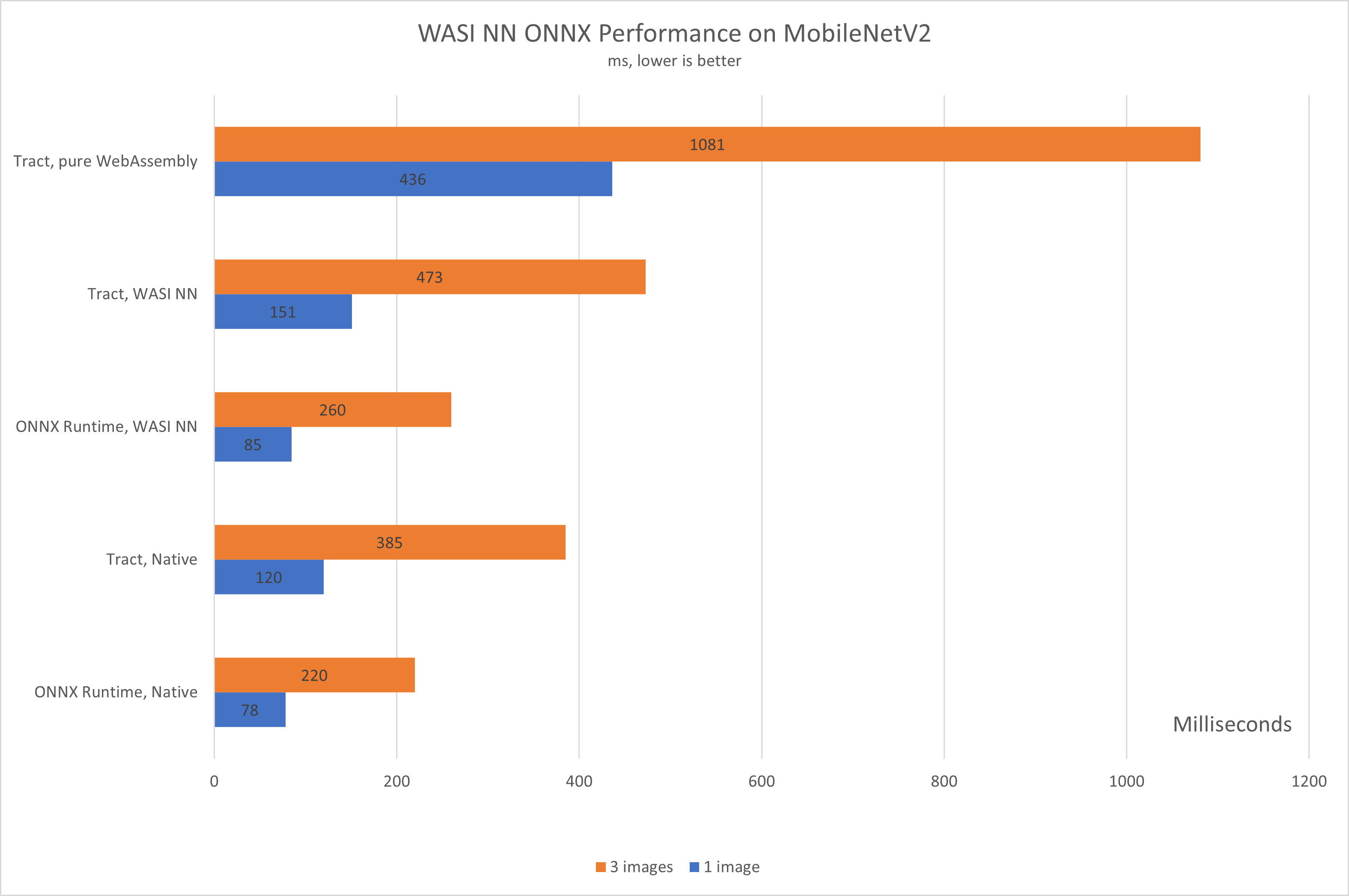 As more modules and GPU support are added, the performance benchmarks will be updated, but there is a trend expected to be seen – regardless of the neural network used, the native ONNX runtime should be faster (or much faster, when GPU support is enabled) than the Tract runtime, which in turn is around 3 to 4 times faster than running purely in WebAssembly, with both WASI NN implementations slightly slower than their natively run counterparts – the difference being mainly because of the module instantiation times.

Building WebAssembly modules that use WASI NN has to be done by using the client bindings – in this case, a slightly modified version that includes the ONNX variant for the graph encoding enum. This API is still very early, and requires the use of unsafe Rust in quite a few places, but future releases should provide a much safer API that will use ndarray.

The one thing that is always required when performing inference on a pre-built neural network is understanding how input data has to be pre-processed when generating the input tensors, and how to interpret the output tensors – in the case of SqueezeNet and MobileNetV2, the images have to be loaded in to a range of [0, 1] and then normalized using mean = [0.485, 0.456, 0.406] and std = [0.229, 0.224, 0.225]. After the inference, post-processing involves calculating the softmax probability scores for each class and sorting them to report the most probable classes. This is, of course, dependent on how each neural network is built, and should be understood before trying to perform inferences, and usually, the ONNX models repository provides enough information and Python implementations on how to perform pre- and post-processing, which can be adapted into the language used to build the Wasm module. For example, let’s explore how to pre-process images for the two models (more Rust examples can be found in the Tract repository):

This is the Rust implementation for the pre-processing steps described above – load the image, resize it to 224 x 224, then scale each pixel value and normalize the resulting tensor. The part worth exploring in more detail is the final f32_vec_to_bytes function – up until the last line of the function, the image had been transformed into an ndarray::Array (which, for people used to data science in Python, should be very similar to numpy.ndarray). The last line has to transform the Array first into a uni-dimensional f32 array, then into a bytes array, since this is how the WASI API transfers data. Then, it’s the runtime’s responsibility to recreate the tensor properly using its desired data type, shapes and dimensions.

Ideally, future releases of the bindings will allow guest modules to simply pass an ndarray::Array, and perform the transformation automatically, based on the shape and data type.

The following represents a non-exhaustive list of known limitations of the implementation. Depending on when this article is read, some of them might be already resolved, and others discovered or introduced:

If you are interested in contributing, around performance, GPU support, or compatibility, please visit the repository and issue queue for an updated list of open issues.

This article explores the WASI NN proposal and describes how the new implementation for ONNX is built, how it works, and how to execute such a runtime with Wasmtime, with a few notes around pre- and post-processing for input tensors when building guest WebAssembly modules in Rust.

Big shout-out to Andrew Brown for his work on WASI NN, to Jiaxiao Zhou for helping out with the ONNX implementation, to Nicolas Bigaouette for his work on the ONNX Rust bindings, and to all the people at Sonos building Tract and the ONNX maintainers.

This project expands the possibility for running real-world neural networks from WebAssembly runtimes by providing near-native performance for executing inferences for PyTorch or TensorFlow models through ONNX. This implementation, as well as WASI NN, are still very early, but results for both ONNX runtimes and OpenVINO™ are promising, particularly when combining this type of workload with outbound networking support, or using cloud services from WebAssembly modules.